Did you grow up loving MS Paint? Microsoft is replacing it on future Window operating systems, but don’t worry,...

Did you grow up loving MS Paint?

Microsoft is replacing it on future Window operating systems, but don’t worry, it’s still being supported. 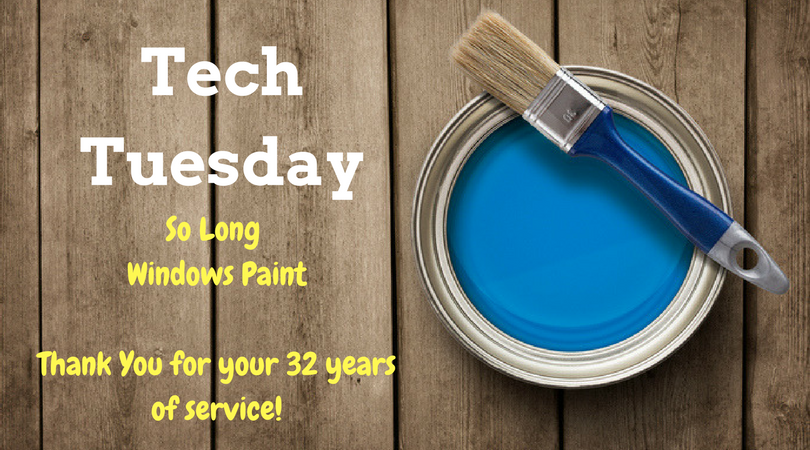 1985 was a great year. It gave us such classics as the time-defying DeLorean in Back to the Future, the chart-topping song Everybody Wants to Rule the World by Tears for Fears, and MS Paint from Microsoft.

Yes, the classic painting program, which came with every Windows operating system since Windows 1.0, was first released way back in 1985. And now it’s time for all of us to say goodbye to MS Paint. Well, at least as a standard application on any new Windows OS.

Microsoft recently made the announcement that the company was removing MS Paint from the Windows 10 Fall Creators Update and replacing it with a newer version that the company named Paint 3D. Despite the company’s assurance to Windows users that Paint 3D was a much better graphics program and would still retain many of the favorite features of MS Paint, there was a passionate outcry.

Whether it was a wave of nostalgia, or that MS Paint fans from around the world wanted Paint to remain as is, they were so upset that they flooded forums and in-boxes with protests.

And it appears their cries were heard!

Just days after making the initial announcement to replace MS Paint, Windows released a statement that acknowledged the program will still be around.  The devotion of its almost 100-million users around the world paid off.  As a compromise, Microsoft made it clear that MS Paint would still be supported and available — It just won’t be a part of any future Windows operating system. Instead, MS Paint is going to have a home on the Windows Store where it will continue to be offered, and for FREE!

A Look Back at the Long History of Microsoft Paint

There are very few things in the world that last for 32 years—And even fewer tech products. MS Paint is one of those incredibly rare applications that’s defied the odds and has found a permanent niche.

In the beginning, using MS Paint was pretty bleak, and a lot less colorful. When the program was first released in November 1985, it was called Windows Paint. It only supported 1-bit monochrome and came with very few drawing tools. However, even with these extreme limitations, the program drew the attention of many.

When Microsoft released Windows 3.0 five years later, things began to look brighter for the program. It received a major makeover, which started with a new name, Paintbrush. Besides a name change, this version added an easier-to-use interface, and the ability to use colors for the first time.

It wasn’t until the release of Windows 98 that MS Paint became a truly functional graphics package. For the Windows 98 version release, Microsoft provided the ability to save artwork in JPEG, GIF and PNG file-extension formats. This change let users create an image in MS Paint and use it in another program. The Windows 98 version of MS Paint also permitted users to create art with a transparent background, a perfect for the burgeoning Internet during that same period.

The release of Windows XP expanded MS Paint’s save formats to include natively saved images as JPEG, GIF, TIFF, PNG and BMP extensions. This version also let users import scans and digital photographs directly into the program, which added a ton of new options.

One of the biggest and most important updates to MS Paint was the version that was distributed with Windows 7.0. In this update, Microsoft added the ability for users to undo up to 10 of the last changes they made. This combined with better controls for cropping and magnification provided real power and functionality.

The last major updates to MS Paint were introduced in Windows 7.0. MS Paint received an overhaul that included a greater selection of brushes, and the annoying, yet playful, need to continuously “reload” your brush while using oil or watercolor to simulate the effect of running out of paint.  Users were now able to undo up to the last 50 changes.

A First Look a Paint 3D

So, what about the program that’s replacing MS Paint? Is it worth using?

The answer depends on why you need or want a 3D-modeling program. If you just want to mess around and try your hand at creating some 3D artwork for fun, then yes. Paint 3D is definitely something you should check out. The interface is a lot more user-friendly than most of the other options on the market, and offers a wide range of 2D and 3D options.

However, for any of my clients who are wondering if they can replace their current 3D- modeling software with Paint 3D, I’d have to recommend holding off on making the switch. Paint 3D’s limitations don’t make it a good alternative for you.

Try Paint 3D out for yourself and see what you think. You can download the latest version of the program from the Windows Store for free. Check it out for a bit of fun, even if you don’t plan on using it for your business.

For more information about Microsoft Paint 3D or other Microsoft Products, for your business in SALINAS, contact Alvarez Technology Group, Inc. at: (831) 753-7677 or info@alvareztg.com