Luis Alvarez President and CEO of the Alvarez Technology Group on the Line. Rebecca:  Hi Luis Thanks for joining us!... 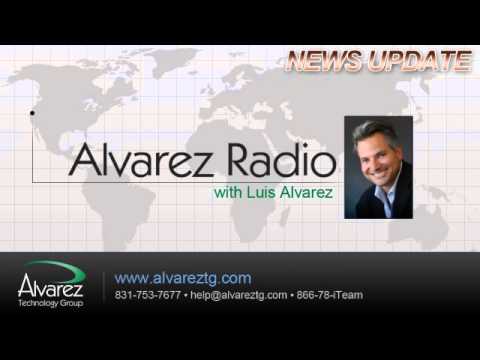 Luis Alvarez President and CEO of the Alvarez Technology Group on the Line.

Rebecca:  Hi Luis Thanks for joining us!

Luis:  My pleasure Rebecca, how are you doing today?

Rebecca: I’m doing great, so what is happening in technology?  I look forward to these segments every week, I feel like a voyeur in technology every time you call in and open up a window and say, “Hey look inside.”

Luis: Well I enjoy it just as much.  A while back you and I had a really interesting conversation about

3D printing, these are devices that use a digital template to in effect manufacture 3-dimensional objects by putting down successive layers of materials to build or print that object, do you remember that conversation?

Rebecca: I do, it sounded like science fiction almost like that replicator from Star Trek by making anything you wanted by printing it out in your home.

Luis: Exactly although the industrial 3D printers have been used by large manufacturers for years to make specialized parts. When we talked before I speculated about the introduction of a practical affordable device for consumers was at least five years away.  Well as it turns out I was wrong.  A company called Cubify just launched a new 3D printer that’s being marketed to the home user, priced at about $1,300 and it can be used to create thousands of things, from iPhone to door knobs to a real guitar.

Rebecca: That is amazing.  $1,300 Can you push a button and out comes out a guitar? How does this work?

Luis:  Well the printer we’re used to prints by putting ink on a flat surface, you know, like a sheet of paper.  The Cube, as a 3D printer is called, builds up material in 3 dimensions to create a real object.  It uses plastic resins to that come in all different colors. The digital templates for these objects are available as software that you download to your computer and then send it to the device, much like sending a print job to a printer. Cubify’s website, Cubify.com for those that are interested, has thousands of templates you can download and software that lets you to design your own 3D objects.  There’s even an app available for your smartphone that takes an object from photograph from the phone that creates a 3-dimensional template that can be printed by The Cube.

Rebecca: I cannot believe how fast this technology’s developing. So will I be able to print a lamp or an iPad?

Luis:  No, not really– Well at least not right away. But for now, consumer 3D printers are limited to using malleable materials like plastics, although the industrial printers which cost millions of dollars use even fine metals or composite materials to create objects.  Consumer 3D printing is something of a novelty really, an appliance you can buy to impress your friends and neighbors in a way that they portend a fundamental shift in our economy that’s developing a lot faster than most people thought it would, including even me.

Rebecca:  What do you mean?

Luis:  Well, manufacturing makes up about 12% of the U.S. economy but most of that, we’re talking about really big things like power generators or cars.  For China, on the other hand, manufacturing makes up about 45% of their economy and most of their manufacturing is concentrated in creating things that can’t be made in the U.S. as cheaply, but otherwise we’d build them here.  Things that the 3D printers can and soon will be able to produce with the push of a button, imagine the economic consequences that we’re talking about.

Rebecca: Well I can see that it would impact manufacturers but what about retailers, and why would anyone want to shop for something if they can just print like a plastic toy at home?

Luis:  Good point.  And even if 3D printers don’t become household items, why wouldn’t a smart entrepreneur invest in buying one, something more sophisticated and complicated than The Cube, set up shop downtown and selling print objects from a catalogue while you waited?  I can see it now: ”Hey, Honey, I’m going to run down to Bob’s Make It While You Wait and get those new coffee mugs you wanted. Be back in an hour.” I think that’s where the real impact will be.  Community-centered light manufacturing shops that can create customized objects when people need them.  No inventory, no overhead–just a gal with her handy 3D printer.

Luis: Yes, beyond a doubt.  And I’m probably incapable of imagining how disruptive this technology is going to be.  No one could have predicted the impact of Henry Ford’s Model T, who saw the Internet coming, and how it fundamentally changed the world, and how about cell phones?  The thing is in most cases disruptive technologies don’t show up suddenly and cause massive changes. They spread quickly, don’t get me wrong, but there’s a natural progression as Ray Kurzwell a gentleman you and I both admire, says, it takes about ten years to take a very expensive technology that doesn’t work well and convert it to a technology that works very well and is almost free.  We’ll have to check back in about a decade to see if he was right about the 3D printers.

Rebecca:  Well you’re absolutely right.  I remember in the 90’s hearing about something about a government program with an Internet we didn’t even know what that was.

Luis:  Or how we could use it.

Rebecca:  Yeah.  And then it sounded like this obscure thing that just the federal government and really large corporations that had enterprise backbone networks were going to be able to utilize in some way. I never imagined that I’d have a handheld device and could walk around and be connected to people.  It was just not imaginable.

Luis:  Absolutely. Yeah we were just talking about that today at the office.  These new smartphones that have better processors and are more capable functionality than the computers that we had on our desks back as early as 1998.

Rebecca:  The other thing I worry about is with all this technology, people could become very reclusive– They could just stay at home, they could create what the want, they could have food to their house.  Just about everything we use can be delivered to your home.  And I worry that we’ll get really separated from one another. Do you ever get that feeling?  I mean, you live and breathe technology. Do you ever worry about that?

Luis: I sometimes do, but then I recognize that the flip side of that is technology has the power to bring together people from so many different walks of life without any sort of geographic barrier. It will let you associate with who you want to, when you want to. So people who many not be comfortable with say the folks that they work with, or people in the neighborhood, can get on social media and create relationships, albeit not real physical relationships.

Rebecca:  Awww, spoken like a true technologist. You know I’m an evolutionary biologist so I can tell you that there are effects that can happen to people by simply not being touched enough. I child that’s not touched enough will begin to show certain types of behaviors.  And as much as I feel like there’s no more barriers to all of us communicating with one another, there’s another side of me that says, “Yes, but we’re not that far out of the cave.”  We still have these basic needs.

Luis:  Yeah.  And touching and community is a big part.

Rebecca:  It really is and I think the more that we get independent, the more amazing that it really is.  But listen, that’s all the time we have. But I want to thank you for keeping us updated every week, and I hope you’ll come back!

Luis: Well, I absolutely will, Rebecca. This is Luis Alvarez of the Alvarez Technology Group reminding everyone that when it comes to technology, forewarned is forearmed.